How to help your dog get relaxed? Get the hang of the Tellington TTouch®!

The Tellington TTouch® method is a unique way of approach to animals, which was created by a well-known, American teacher Linda Tellington-Jones. The concept of this practice is based upon the Feldenkreis method, which is geared towards people. At first, Linda Tellington started with horses and then with other animals, such as dogs, cats even with turtles and parrots!

Most people associate the Tellington TTouch® method with a massage, however, it’s a far cry away as it focuses on the nervous system of an animal, and not on the muscular system.

Tellington TTouch® – what is it about?

The aspect and the goal are to help an animal to restore its physical balance and to ease the inner tensions of the body itself, which is beneficial to dog’s behavior. Such impact derives from the connection between the physical body and the emotions, which infiltrate and enhance themselves. For instance, many dogs which display such behavior as lunging or barking at people and other dogs (which is known as a reactive behavior), have often tensions in the rear part of their bodies. So when we work on that and release them, the behavior might change as well.

When we work out a way to ease those tensions, we could lower or even eliminate – the negative symptoms in the behavior. It happens because the elimination of the main cause (the one which lies in the physical body), which automatically influences the dog’s behavior (therefore a change on the emotional level takes place). 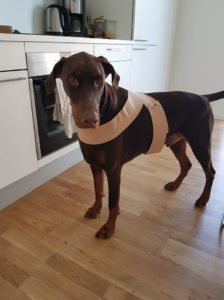 It’s similar to a headache – we could just simply swallow a pill and the pain will be gone. However, if we cannot identify and “fix” (in this case, the treatment should be focused on relaxation) the main cause (e.g. overworking), the pain could easily come back or it would manifest itself in a more serious condition.

The behavioral therapy, in most cases,  introduces a substitute behavior, which is to be adopted by a dog. This practice does not enhance the way that dog feels in a particular situation. With the help of TTouch® we operate on a deeper level, so we could work out dog’s feeling of confidence and restore its balance, assuring the dog, that it could manage on its own, in a stressful environment.

TTouch® helps with broadening the fields of communication and relaxation, and what is more, with the creation of unique or even, we may say, spiritual bond with one’s own dog.

Better balance and the body awareness

The Tellington TTouch® method consists of three elements. What kind of elements?

– Working the body with touches: circular (one and quarter circle), lifted and connected. The animal feels the touch in a totally new and different way, with a small pressure on the skin and performed, while being fully focused. We do it by moving the skin, not on the skin.
This method stimulates the nervous system with fresh and new spurs.

– Body wrap. It helps the dog with gaining a feeling of its own body, focusing the animal’s mind on the particular parts of it, which it was unaware of, previously. It also helps with restoring the balance and the coordination.

– Groundwork. Usage of items, such as mats of various surfaces, poles, bitts and labyrinth made of poles. We also perform exercises with usage of long ropes or double ended leash. The main purpose of such activity is to calm down the movement of the dog. Therefore, the dog can learn how concentrate and experience a physical balance. 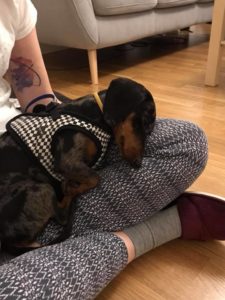 A cure for many issues

This method can help solving many emotional and behavioral issues. Moreover, it could also treat dogs, which suffer from physical conditions, especially those related to aging process. Practicing this method is truly beneficial, when dealing with issues, such as:

The thing I love about the Tellington TTouch® method is the philosophy behind it, which promotes a totally fresh and new attitude towards the dog. This is why I use it in my practice when offering behavioral consultations. According to it, while working with an animal, we move away from any assumptions and judging. We strive to understand what the animal is trying to tell us, and we approach it with empathy and respect, without forcing it to act as we would expect it to. We try to listen to what it tries to tell us with its non-verbal communication. Such attitude builds a relationship based on trust, cooperation and harmony.

Would you like to book a session with Zuzanna to work on your dog’s behavioral issue? Book a date HERE 🙂

We use cookies to ensure that we give you the best experience on our website. If you continue to use this site we will assume that you are happy with it.Ok